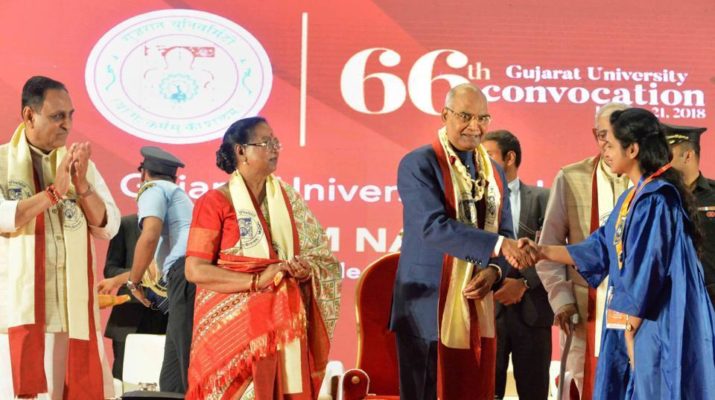 President Ram Nath Kovind praised Prime Minister Narendra Modi, saying he opened the doors of the 21st century for today’s generation by bringing in initiatives like Digital India and Start Up India.

President Ram Nath Kovind on Sunday drew a parallel between APJ Abdul Kalam and Narendra Modi, saying while the former president was a “space scientist”, the current prime minister is a “social scientist”.

Kovind was addressing the 66th convocation ceremony of Gujarat University in Ahmedabad.

“Kalam sir was ultimately and fortunately my predecessor. Though he became the president, he was basically a scientist. Thus, I usually refer to him as a ‘space scientist’ while I call Modi ji a ‘social scientist’,” Kovind said in his address.

“While Modi ji was an alumnus of Gujarat University, Kalam sir too had stayed here for some time,” he said.

On a lighter note, the President said none of the students present at the ceremony would have sold tea like Modi did in his younger days.

“…This is a person who was born and brought up here, studied here and then became the prime minister. This was truly inspirational,” Kovind said.

He said Modi opened the doors of the 21st century for today’s generation by bringing in various initiatives, such as Digital India and Start Up India.

Kovind urged students to keep in mind the ethos of cooperation and brotherhood to bring in development.

As many as 56,159 graduates of Gujarat University, the oldest in the state, were awarded degrees at the convocation ceremony.